The Behning Piano Company, established in 1861 in New York, survived for nearly 100 years, and has a colorful history. I’ve decided to show its history in a time line format, as the ownership/management underwent several changes over the years.

Pianos and The Great Depression

When you think of old pianos, do you think of ornate carvings? The fancy pianos are the ones made in the early 1900s and before. Behning & Sons certainly made some of the finest, most ornate pianos I have ever seen, according to photos I’ve come across on the Internet. The Behning & Sons piano that was given to me was marked with Serial #48409, indicating that it was manufactured in 1922, when the two sons were running the company. I don’t recall much about what this piano looked like, except that it was plain. This one came into existence right on the heels of the Great Depression. People did not have money for extravagance. Their lives had been stripped of frills and “extras.” They had no use for ornate things; now they wanted more practical items in their homes. This is why piano makers, including Behning & Sons, started producing the plain, boxy style cabinets for their upright pianos. Shorter pianos also became more popular because they took up less visual space in the room, as rooms were smaller than before. Grands and baby grands were still being produced, and the styles of their cases were also simplified.

Piano manufacturers also learned how to make “economy” pianos so that people could still enjoy music on a tighter budget. Sometimes the result meant a sacrifice in quality, but often it was more a sacrifice in aesthetics, with still a pleasing sound from the instrument. Behning & Sons did not sacrifice quality. In fact, they were known for producing high-quality, expensive pianos, and enjoyed a great deal of success. They even made the Wendland player piano during the years between 1910 and 1930. Perhaps it was their self-imposed standard of high quality that made it hard for them to survive the Great Depression, for not too long after that period, the younger son, Gustave, being left alone with the company, was compelled to sell it to Kohler & Campbell, who kept the name alive for nearly another quarter of a century. (I thought this was interesting, since I’ve also come across a 1915 Kohler & Campbell piano.)

My photos of this piano are not impressive, but are mostly “for the record.” Usually I take the entire piano away when I acquire one, but this was one of the rare occasions when I got to disassemble it on-site and take only what I could carry. With the seats all folded down in the minivan (not the van in the photo), we were able to take everything but what was firmly attached to the cast iron plate. In other words, I did not keep the strings or the soundboard, nor the side boards or back boards, but I kept everything else. I got good photos of the markings on the plate because I knew I would never see it again, and those markings are how I identify the piano.

Also in the photos you will see the son of the dear folks who gave me the piano, my son who helps me with most of the moves, and our indispensable Dolly. 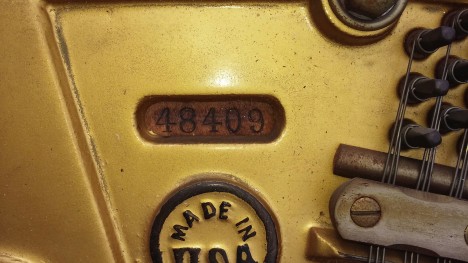 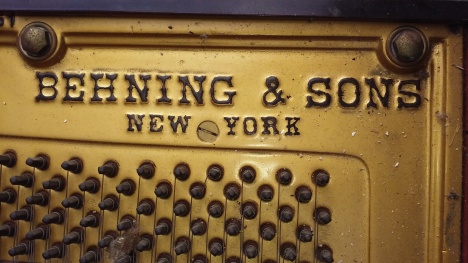 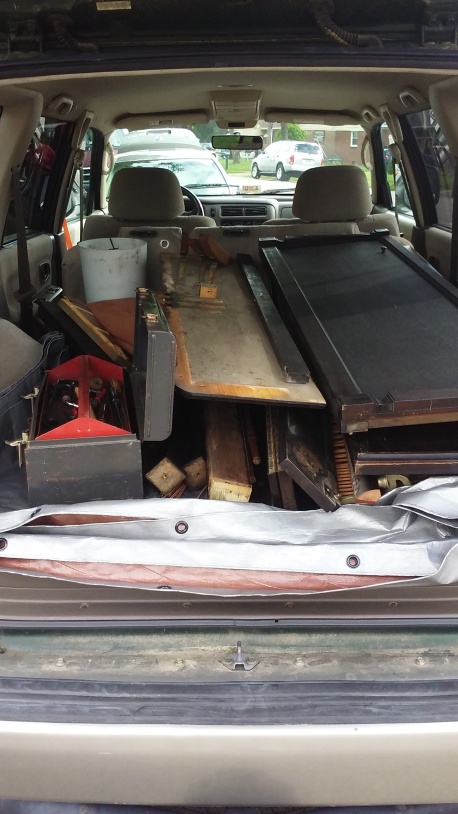 If you own a Behning & Sons piano, you can be proud of the fine-quality, American-made musical instrument that graces your home, and I hope you will care for it and play it often.

Follow Encore! Old Pianos with a New Song on WordPress.com
Join 314 other subscribers

My newest Christmas ornaments
After 6 weeks of being down with foot surgery, we are finally open again for an in-person craft fair. Come check out all the vendors: painted oyster shells, wreaths, wood puzzles, cutting boards, textiles, mixed media piano art, and more. It's a one-stop shop for everyone on your Christmas list! Today and tomorrow only!
Part 2 in the guest room makeover is the TV tray nightstand that Matthew left behind. I painted it black, then decoupaged music-themed fabric to a portion of the top after painting a keyboard on the remaining part. A thin ribbon of red separates the two treatments. All is sealed with layers of Mod Podge. I found this beautiful little planter in the clearance section at Walmart and thought it would be perfect for the space. I especially live how it's shaped like a metronome.
After a mildly emotional parting with the furniture Pat and I bought together over 25 years ago, our guest room is now taking on a musical vibe.
I'll Fly Away Redeemed
The Lighthouse
Guitar Man
Sheet Music
Piano Pieces
Loading Comments...
%d bloggers like this: